The unexpected Costa Rican adventures on the drive from The Four Seasons/Papagayo to the Lake Arenal/Chachagua area.

Firstly, the drive ANYWHERE in Costa Rica can be an adventure, in and of itself. The roads are pretty rustic and can be clogged by: cows, very slow road workers repairing the roads, an accident or a car break down, horses, dogs….you get the picture. However, the country is so pretty, that one doesn’t mind a slower go.

Just passed the first sighting of Lake Arenal and the Arenal Volcano, road signs for “Toad Hall” begin every few kilometers. Being a child of the 70’s, and having been taken to Disney World by patient parents, I immediately thought of Mr. Toad’s Wild Ride (which I don’t think is operational in Fantasy Land anymore). My anticipation grew every time we saw another sign; I kept wondering if Toad’s Hall was: a bar, a club of some sort, a retail store… All of a sudden, we arrived at Toad Hall, which is the name of a town! Everything in the town, is named “Toad Hall” something. I found it to be hilarious and had to snap some photos. 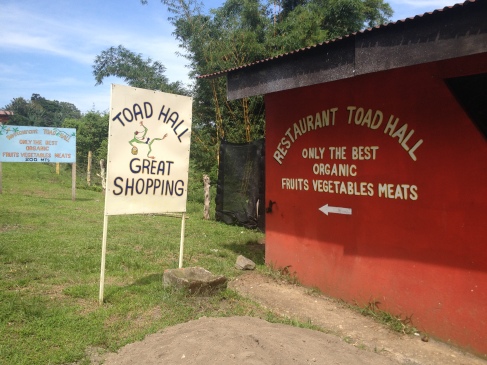 Apparently, there’s a hotel in Toad’s Hall, but it escaped me; link to follow:
http://www.toadhallarenal.com/

Next, we began to see very unlikely signs every kilometer or so, for a German Bakery. Again, curiosity and an intense craving for bread built as we passed sign after sign. There was no way that we could pass the bakery and not stop! It felt odd, that in the middle of Costa Rica, that there would be a German bakery.  When we finally saw the shop we quickly parked and ran in, just as Tom (the owner) was removing several types of bread loaves from the oven. Tom establishment is fabulous!

There are cats and, very appropriately, a gentle German Shepherd who followed me around and sat under my chair during my breakfast.  Not only are baked goods served at Tom’s German Bakery in Nuevo Arenal,  but also for sale are locally produced art, soaps (made by Tom’s girlfriend), fruit preserves, bratwurst, sauerkraut, schnitzel, eggs, etc…We ordered the bread basket with homemade preserves and fresh guava juice, cappuccinos, brats, eggs and sauerkraut. Not only was ALL of the food fantastic, but we became so friendly with Tom, that he asked us to join him for a day of play on Lake Arenal on his boat the next time we were in the area.
By the way, most of his patrons were speaking German and were drinking tall beers with their breakfasts at 9am; I felt uncomfortable photographing the other customers. I highly recommend that you check it out, should you be in Nuevo Arenal. 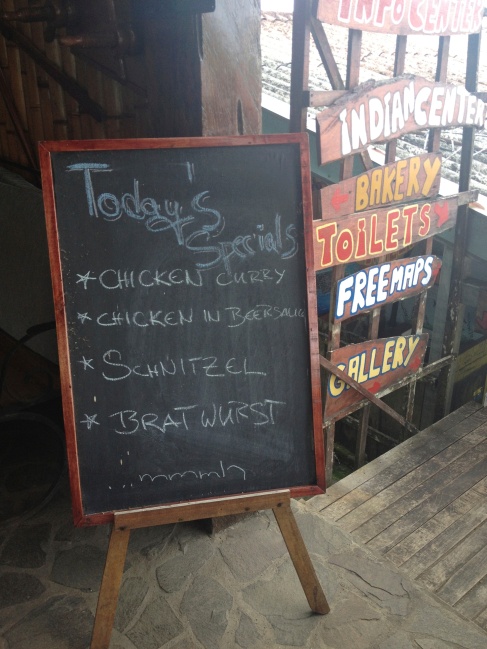 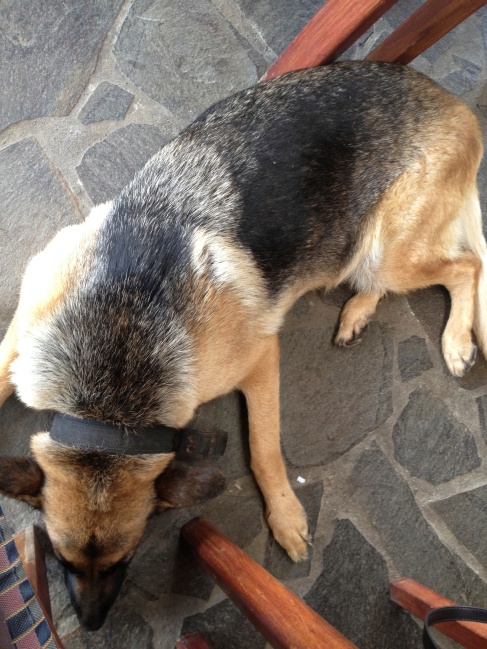 After breakfast and carbing-up for some serious rainforest hiking, we continued our journey to Chachagua (our ultimate destination on this itinerary), when we drove through the town of La Fortuna and saw yet another intriguing road-side sign for an organic gourmet restaurant called “Benedictus Steak House”
http://www.tripadvisor.com/Restaurant_Review-g309226-d1915736-Reviews-Benedictus_Steak_House-La_Fortuna_de_San_Carlos_Arenal_Volcano_National_Park_Prov.html
which appeared to be located up yet another unpaved, rustic road up a several hills and over a river…(Costa Rican version of “Over the River and Through the Woods” but we weren’t going to Grandmother’s house this time). Now, I’m a “pescatarian” but, predominantly eat only plant based foods…However, the restaurant is an organic establishment, which grows/nurtures their own livestock and produce- which piqued my curiosity.

After following a rustic, winding road up a hill, as we passed the farm and barn, we encountered a beautiful restaurant, met the owner and booked lunch for the following day. Oscar was our server, and his intelligent, gentile service was impeccable. We sat outside on the upstairs terrace and watched and listened to the natural show of a lifetime! As scrumptious food arrived (my traveling companion is not a vegetarian and swears that the steak was the best EVER) we watched Montezuma Oropendola’s building nests and feeding their young (their bird song is so unique and entrancing)
http://en.wikipedia.org/wiki/Montezuma_Oropendola
as well as watching the rainy thunderstorm, complete with lightning in the distance. Benedictus exceeded my carnivore friend’s expectations, as well as my vegetarian/pescatarian’s hopes- the ceviche is outstanding! Go and experience this magical place.

Finally, we made our way to the little town of Chachagua, which is charming in a very poor, but happy place. I’ve never met ANYONE in Chachagua who wasn’t waving hello, smiling, helpful…and most of these people don’t have glass in their windows, live down dirt roads, I suppose they just live simply….but are simply happy. Once again, a sign on the side of the road indicates one of my favorite places on the planet: The Chachagua Rainforest Hotel:

I’ve had the pleasure of staying there now only two times within a 12 mos. period, but once I arrive, I NEVER want to leave. The property is completely self-sufficient ecologically, trains locals to raise their own sustainable crops, offers luxury bungalows (at the risk of losing my spot- number 114 is the best), offers fast wifi throughout the property, provides delicious meals (all grown on property – livestock, eggs, and all fruit and veg). There are horses available for hire to explore with Carlos ( a knowledgeable, local, gentleman who know every neighbor along the way). You even have one of the most intelligent, playful, gentle, curious, lovable dog with which to play during your stay (Canela- cinnamon in Spanish)…we always feed her and she hangs out with me while I read in my hammock during rainy afternoons—–it is the rainforest, after all). Make sure to book a rainforest tour with Christian, the on-site naturalist, who is passionately educated as to every plant, amphibian, tree, etc.. along the way- he’s a third generation Chachaguan. Take a plunge in the natural mountain-fed spring swimming pool, stroll through the barn and greenhouse( I just had the opportunity to hold a new-born rabbit born in the lettuce patch, and no, I’m not Beatrice Potter and no, I’m not joking)…I could go on and on. Lastly, the hospitality is kind, attentive, intelligent, lovely in all ways….go there….soon!!!!!! 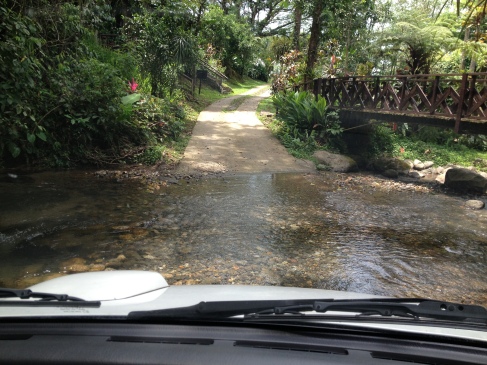 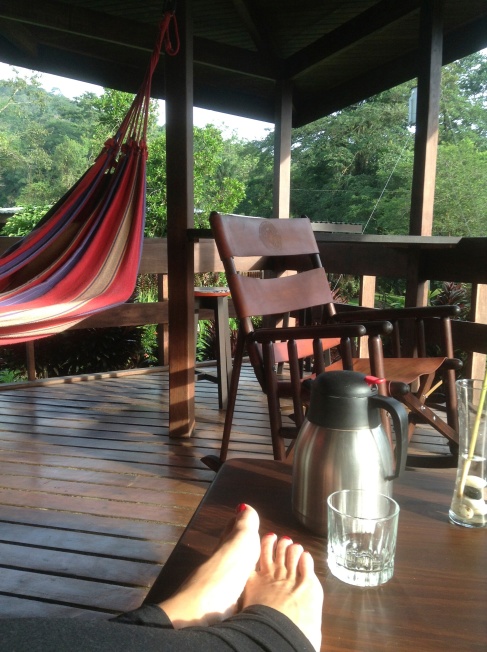 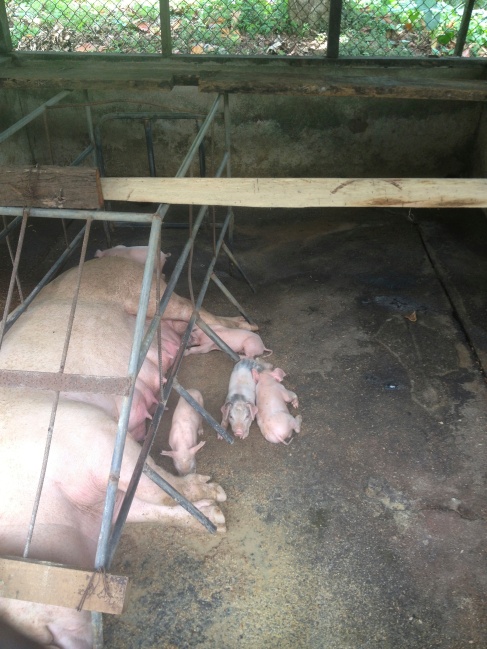 Finally, I had to share with you a Chachaguan gentleman we encountered on the way to the Chachagua Rainforest Hotel. The following photo is of a man who was very happy with his “catch of the day”. Iguanas are eaten in Costa Rica. Look at the size!!!!!